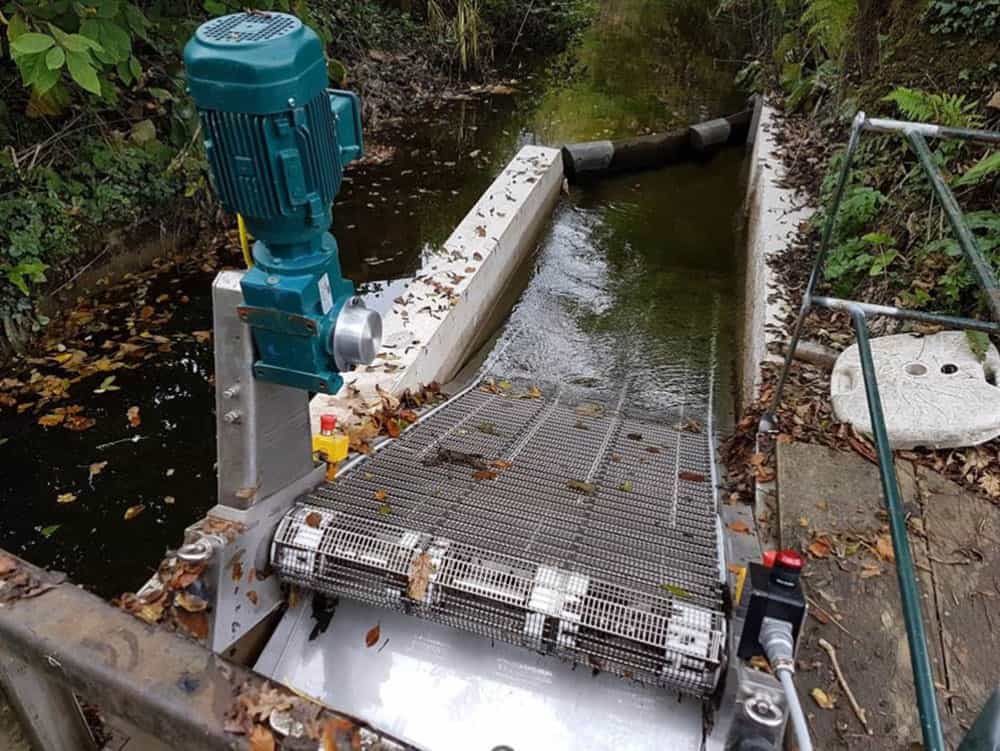 Gloucestershire based Renewables First, who specialise in the feasibility, consenting, design and construction of low and high head hydropower systems throughout the UK and overseas, was hired in order to implement the hydropower component of the scheme. GoFlo Screens Ltd, a company borne out of Renewables First, was later commissioned to design, manufacture and install one of their innovative self-cleaning water intake screens, in order to meet stringent eel screening regulations and boost the energy capture from the turbine. Working collaboratively, both company’s project managed all stages of the scheme from feasibility, through to the design and consenting stages, installation and final commissioning.

The Kenningstock Mill scheme is located at Camelford in Cornwall. The hydropower component comprises a 25 kW Crossflow turbine, with a calculated annual generation of 107,454 kWh per year, enough to power the equivalent of 25 UK homes and displacing 53,727 Kg/CO2 per year. 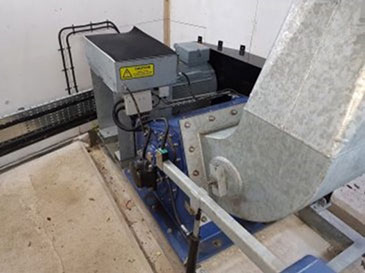 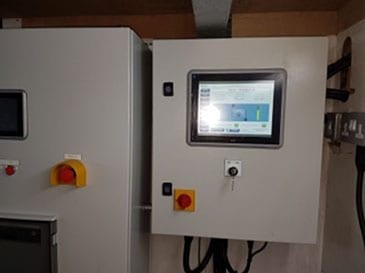 The self-cleaning water intake screen was manufactured and installed by Gloucestershire based, GoFlo Screens Ltd. The installation comprises one screen unit with a width of 0.9 m and a length of 4.1 m. The screen is equipped with a fine mesh in order to provide fish and eel screening and to comply with environmental regulation. The screen is designed to accommodate a maximum flow rate of 0.6 m3/s and was designed to fit into the recently installed 25 kW hydro scheme. Prior to the GoFlo screen being installed at Kenningstock Mill, water was abstracted via a drum screen intake system into a penstock forebay header tank which fed a 24 ” penstock, approximately 30 m in length. The water was then transferred through to a Francis turbine (now replaced) for hydroelectric generation before transferring through the outfall tunnel and re-joining the watercourse. Following installation of the 25 kW Crossflow turbine and since becoming aware of the innovative design features of the GoFlo travelling screen, the site owners replaced the drum screen with the GoFlo system. 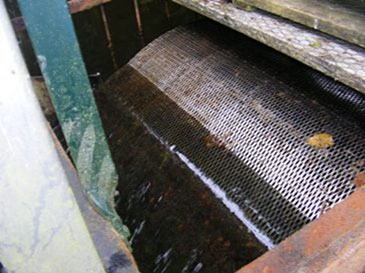 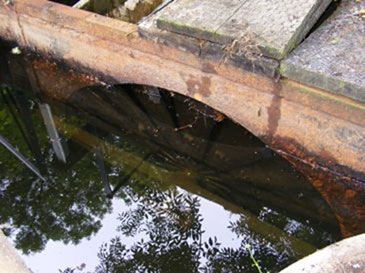 Lifting the GoFlo screen into position 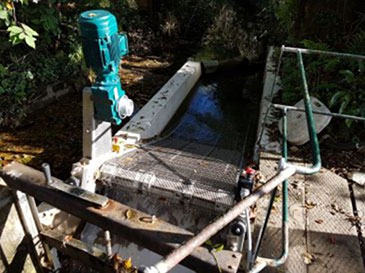 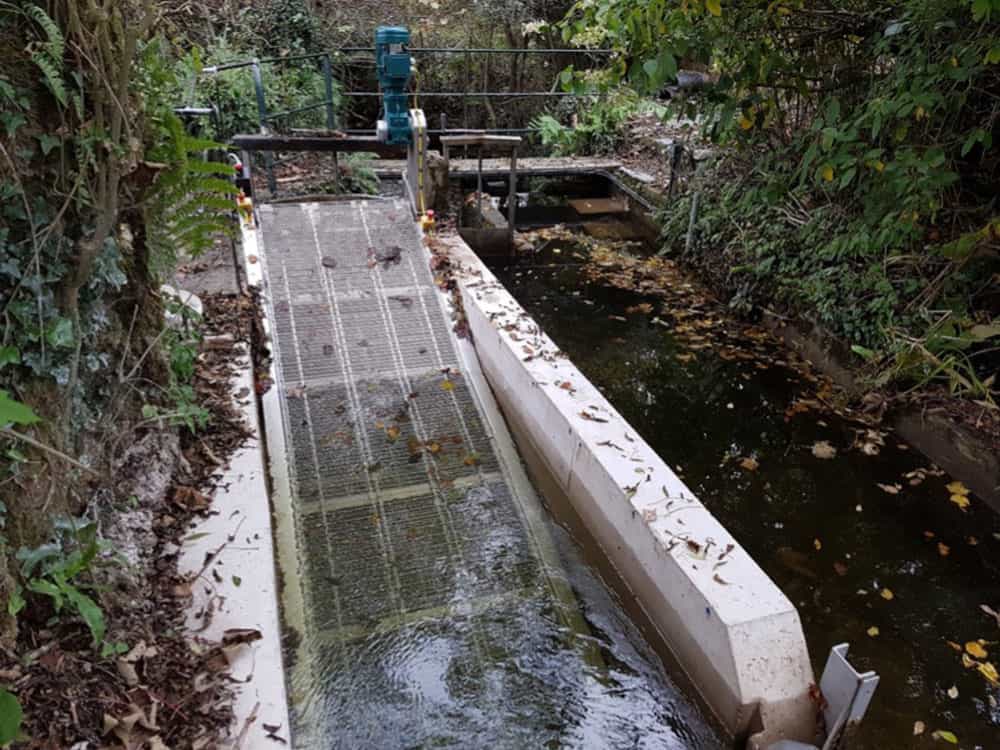 Why use a self-cleaning screen at this site?

The requirement for a very fine screen mesh makes the Kenningstock site an ideal location for the GoFlo self-cleaning screen due to its excellent eel screening design. In response to tightening eel screening regulations, manufacturers of water intake screens have developed ever-finer screen meshes in order to protect aquatic life. Whilst good for wildlife, ever-finer screen mesh requirements present a significant problem for hydropower systems because as the screens become finer they increasingly get clogged with debris which renders the hydro system inoperable or operating inefficiently.

Screen blockages and reduced flow are the primary cause of turbine downtime or poor performance at most hydro sites. Blocked screens lead to significant losses of income if they aren’t quickly unblocked.

Intake screen-cleaning systems have been commonplace for years and come in a range of shapes and sizes, but they all begin to struggle as the bar-spacing reduces and ever-finer debris gets trapped and requires removal. Not so with the GoFlo travelling screen. 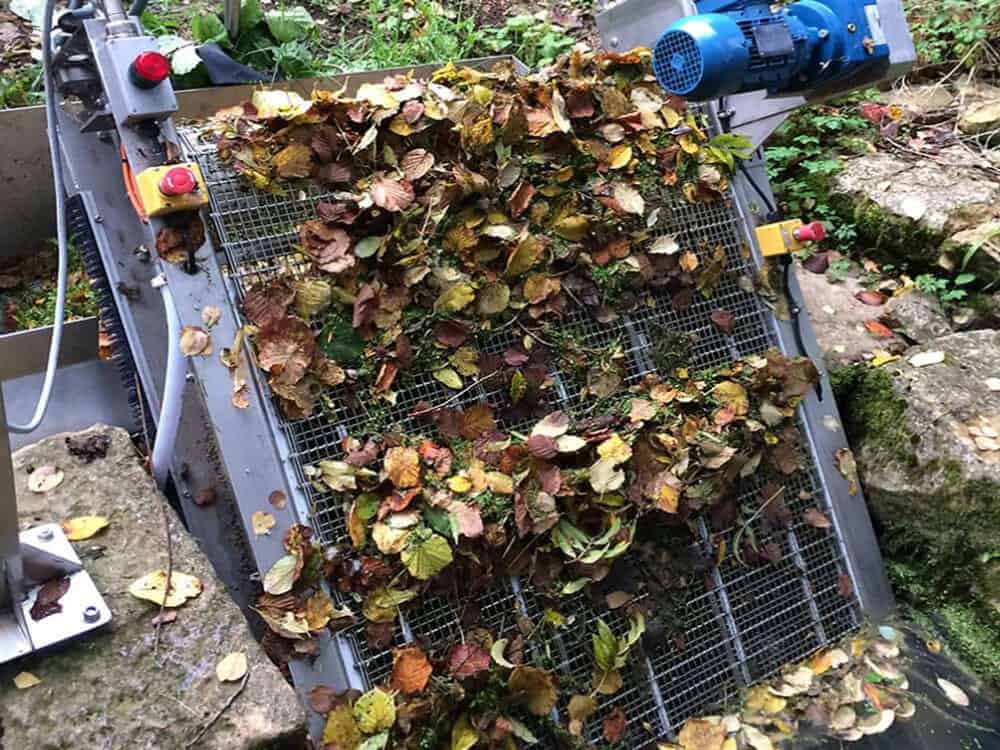 GoFlo screen scooping up leaf debris at the intake

The GoFlo automatic self-cleaning intake screen ensures that you meet environmental regulations, such as the Eel Regulations, whilst also greatly increasing the energy yield and therefore hydropower income generated by your system. Combining hydropower technology with the GoFlo self-cleaning screen is a win-win situation. Although the annual energy capture of the Kenningstock scheme was originally calculated to be 107,454 kWh per year, the later addition of the GoFlo screen will significantly improve the energy capture of the scheme by up to 20 %.

But what is it about the GoFlo screen design that makes it an attractive proposition for hydropower sites? As well as the economic benefits outlined above, the eel screening provided by these screens enable compliance with stringent fish and eel regulations. They offer long-term reliability and permanently clean operation.

Screen maintenance requirements are straightforward and low cost. The screens are visually unobtrusive and are equipped with a remote monitoring and control system. Furthermore, the screens are easily installed using purpose-designed hinged (pivoting) mounting frames that are securely fixed to the concrete inlet structure. The screens are simply lowered into the pivoting frames from a vertical position. Once secure within the frames, the screens were then tilted to their specified running position. The motors used to power the screens at Kenningstock are located well above the level of the screen. However, they are fully rated to withstand full submersion in the event of flood conditions.

Once installed and operable, the screen remains stationary until integrated pressure sensors on the upstream and downstream sides detect a head loss across the screen, which triggers a cleaning cycle. Clearing debris is achieved by the screen mesh rotating, pulling trapped debris out of the water and dumping it into a flushing trough on the downstream side. Debris that doesn’t freely fall off is blasted off with a spray boom that sprays outward from inside the mesh. Once debris is in the flushing trough, a pumped water supply which runs whenever the screen mesh rotates washes the debris down the trough back to the watercourse, downstream of the system. This is considered best practice for naturally-derived debris, because decaying leaves and natural debris comprise the base of the food chain in aquatic ecosystems. This all happens automatically and is tied into the control system. 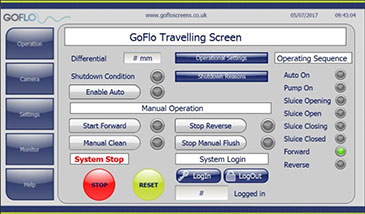 The GoFlo travelling water screen can be controlled automatically or manually and incorporates numerous features designed to maximise the effectiveness of the system. The screen can also be monitored and controlled remotely via a mobile device. System performance can be monitored using real-time trend graphs that monitor key parameters in the system and the data is exportable for long term monitoring. Any events that cause system alarms are displayed locally and sent by email to the customer. As an extra option, the GoFlo team can also monitor your system for critical alerts and take any action necessary to clear the alarms. 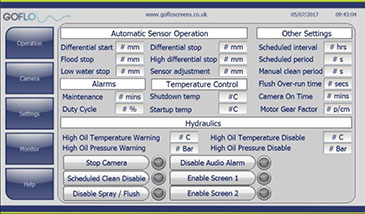 Granular system operational and control settings provide for optimisation of the system when environmental and seasonal characteristics of the watercourse change. The scheme at Kenningstock incorporates the sophisticated GoFlo monitoring and control feature enabling full remote control of the system. The control and monitoring system is equipped with a mobile device interface, meaning that it can be monitored and controlled from anywhere with a suitable internet connection. 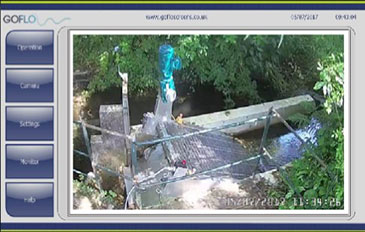 A high quality day and night vision CCTV camera is installed overlooking your GoFlo screen. You can view this via the built-in web interface to allow you to check for problems that require addressing or just look at how well GoFlo is doing at keeping your intake screen free of debris!

Below is a testimonial from our client:

“Having taken over my aunt’s converted watermill in Cornwall in 2011, we inherited what must have been one of the first hydro schemes installed in the South-West. The first decision we had to make was whether to update the existing scheme, based around a reconditioned Francis turbine installed in the 1970s, or replace it with a more efficient modern turbine. We commissioned Renewables First to carry out a feasibility study and the results were not unexpected. An updated Francis turbine, even with the river in flood, would only ever operate at 50% of capacity because of the limitations of the site. Guided by them, we took the decision to install a new 25 KW cross-flow turbine made in the South-West by Ecowave.

We tasked the Renewables First team with using as much of the existing infrastructure as possible while keeping civil engineering work to a minimum – not an easy job given the restricted nature of the site. The result was a resounding success. The technical skills shown by the team and their dedication to delivering the scheme on time and to the highest possible standards was outstanding.
In the spring of 2016 we reached a decision that the pre-existing screen used to prevent leaves, wood and fish from passing through the turbine, was no longer fit for purpose. We had no hesitation in asking Renewables First’s sister company, GoFlo Screens, to design and build a new automated filter screen to sit in the leat across the entrance of the penstock. This was installed in the autumn. After a few minor adjustments, we now have a modern hydro scheme, capable of operating in all conditions, throughout the year.

We would have no hesitation in recommending Renewables First to anyone contemplating the installation of a small-scale, hydro-electric scheme.”

Made in the UK

The GoFlo travelling screen system was developed by experienced hydro engineers based in the UK. One of the greatest benefits of using a GoFlo travelling screens, aside from UK content, is the exceptional customer focussed UK based support available to ensure the system is operating efficiently and trouble free over its lifetime.